Older Adults and Matters of Substance

Substance Use and Abuse Among Older Adults: Reality and Treatment Options

Substance Use Is a Critical Health and Mental Health Issue for Older Adults
By Madeline A. Naegle and Benjamin H. Han

Substance Use Disorders in Older Adults: Overview and Future Directions
By Carlos Blanco and Isabella Lennon

Substance Use: Implications for Health and Well-being

Something to Talk About: Reducing Risk in Alcohol Consumption Using Education and Conversation
By Deborah S. Finnell

Why Older Adults Should Quit Tobacco and How They Can
By Lisa U. Nguyen and Timothy C. Chen

What Can a Recovery Model for Alaska Natives Teach Us about Substance Use and Older Adults?
By Jordan P. Lewis

Prevalence and Correlates of Methamphetamine Use Among Men Who Have Sex with Men in San Francisco
By Glenn-Milo Santos, Desmond Miller, Jennifer Jain, Akua Gyamerah, Erin Wilson, Willi McFarland, and Henry F. Raymond

The Importance of Social Security as an Equalizer
By Wenliang Hou and Geoffrey T. Sanzenbacher

The Diversity of Older Immigrants and Precarious Aging: Eligibility and Access to Public Benefits
By Trinh Phan and Gelila Selassie

Precarity on a Global Scale

The COVID-19 Pandemic and Precarious Aging: The Importance of an Equity
By Marc A. Garcia, Adriana M. Reyes, and Catherine Garcia

Precarity in Relation to Place

Prior to the pandemic, housing security had been a complex issue among older adults, and homelessness in this cohort was a growing concern. Now with COVID-19, some older adults may be protected from issues such as eviction as many own their homes, but others may be struggling to pay rent. Of great concern are near retirees, many of whom, as noted below, are struggling with their employment and housing.

One significant consequence of the COVID-19 pandemic is increased risk of eviction for people struggling to pay rent due to a job loss or a decrease in wages. According to a recent weekly U.S. Census Household Pulse Survey (July 16–21), 21 percent of renters reported they didn’t pay last month’s rent or it was deferred. And more than a third said they have no, or only slight confidence that they’ll be able to pay next month’s rent.

With the moratorium on evictions in federally assisted or backed housing having expired July 24, what will happen next to these renters? The ban covered at least 12 million households, or about 30 percent of all renters. Several state and local eviction moratoriums protected renters more broadly, but many of those have also expired.

Some Elders Insulated, Some Exposed

Older adults tend to be more insulated from the risk of eviction than the overall renter population, partially because many older adults derive monthly income from retirement sources and not wages. Just under a quarter of older adults ages 65 and older had work-related income in 2018.

The proportion of older adults ages 65 and older who reported being behind on last month’s rent (7 percent) is substantially smaller than the overall renter population, but twice this proportion (14 percent) reported they have no, or only slight confidence that they could pay next month’s rent. Clearly, the number of older adult renters behind on their rent could increase. Older adults who are unable to or concerned that they won’t be able to pay their rent could be among those who were still working and suffered a job loss. Fifteen percent of households ages 65 and older were fully employed in 2017, including 27 percent of those ages 65 to 69. While some older adults keep working by choice, many do so out of financial necessity. And some older renters may see a decline in financial support from family members who have experienced income losses under the pandemic.

The biggest area of concern may lie with near retirees. Among individuals ages 55 to 64, 21 percent reported not paying rent last month and 30 percent said they have no, or only slight confidence they could pay rent next month.

Dark Clouds on the Employment Horizon

Between March and June of this year, nearly 5 million older workers ages 55 to 70 lost their jobs. Older workers, particularly older nonwhite and female workers, are disproportionately represented in several of the occupations at higher risk for layoff due to COVID-related restrictions, including food service, sales, maintenance and repair and production jobs.

Some older workers weekly hours may have been cut. Plus, 40 percent of workers ages 50 and older don’t have access to paid sick leave if they get infected or exposed to COVID and have to quarantine. Older workers are overrepresented in several of the occupations that were deemed essential during the pandemic, such as personal and home health care, building cleaning and maintenance and transportation and material moving. These factors could have decreased older workers’ incomes, which is particularly difficult to absorb for those at the lowest end of the income spectrum.

It takes workers older than age 55 who have lost their job almost twice as long to find a new job as it does younger workers. This could be due to reasons such as age discrimination, skill deficits, or health conditions that limit what they can do. Additionally, when older workers secure a new job, they often earn less than they had previously.

Almost half of the 5 million older workers who lost their jobs between March and June have left the labor force entirely. Many in the pre-retirement age group are financially unprepared for retirement. In 2016, 29 percent of households ages 55 and older had no retirement savings and no defined benefit plan. In the same year, median retirement savings among families ages 56 to 61 was $21,000. Forced retirees may go into debt; draw on their retirement savings (if they have any); or apply for Social Security earlier, which lowers their benefit level.

While eviction moratoriums temporarily protect individuals from losing their homes, back rent and related late fees do not go away. For those already struggling to meet their housing costs, it’s hard to imagine where those large lump sums of cash will come from to settle their debt.

Given the research showing the extended time it takes older workers to find new jobs after being laid off, and the proportion who permanently leave the workforce after struggling to find a new job, the impact of job losses and reductions in income under COVID-19 could have immediate and long-term implications for older adults’ housing security. In addition to the potential for an increase in homelessness, many could see increased or new levels of housing costs burdens.

It’s crucial that we implement emergency assistance now, at the very least, to prevent otherwise potentially devastating outcomes to older adults’ health and well-being and our public systems. 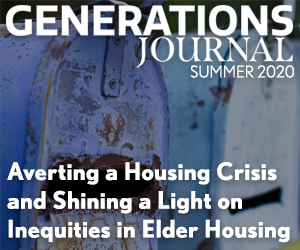